Located on the Burswood Peninsula, Perth “Optus” Stadium is transforming the way Australian fans experience sporting and entertainment events and bringing refreshing breath of life to the west coast. AAF is proud to join hands with top architects in this ambitious project and turn it into an architectural icon in Australia.

Perth Stadium – a testament of architectural and aesthetic excellence

Since opening its gates to the public in January 2018, Perth Stadium (aka Optus Stadium) has been the third largest sporting venue in Australia. The stadium could seat 60,000 people in AFL mode with capacity to put another 10,000 additional seats for special occasions like international concerts or community events. Currently the home ground for two AFL local teams, Perth Stadium is known among Fremantle supporters as The Craypot whereas the Eagles fans are invincible in their new The Eagles Nest.

No matter which name gets cheered, sporting fans in Western Australia could take pride in their home ground’s state-of-the-art design and magnificent landscaping. A joint masterpiece of Hassell, Cox Architecture and HKS, this five-tiered, aluminium-clad structure features a fabric floating roof that covers 85% of the seats and encloses the pitch into a steep, bowl-shaped arrangement for better views and engagement with the games. Internally, seating tiers are geometrically layered and sectioned to intensify the spectators’ experience. That is not to mention a wide range of hospitality facilities along the north and south sides of the stadium which offer optimal view towards the field and upscale interior design. All are combined to enforce the unrivalled fans-first ambience at Perth Stadium. 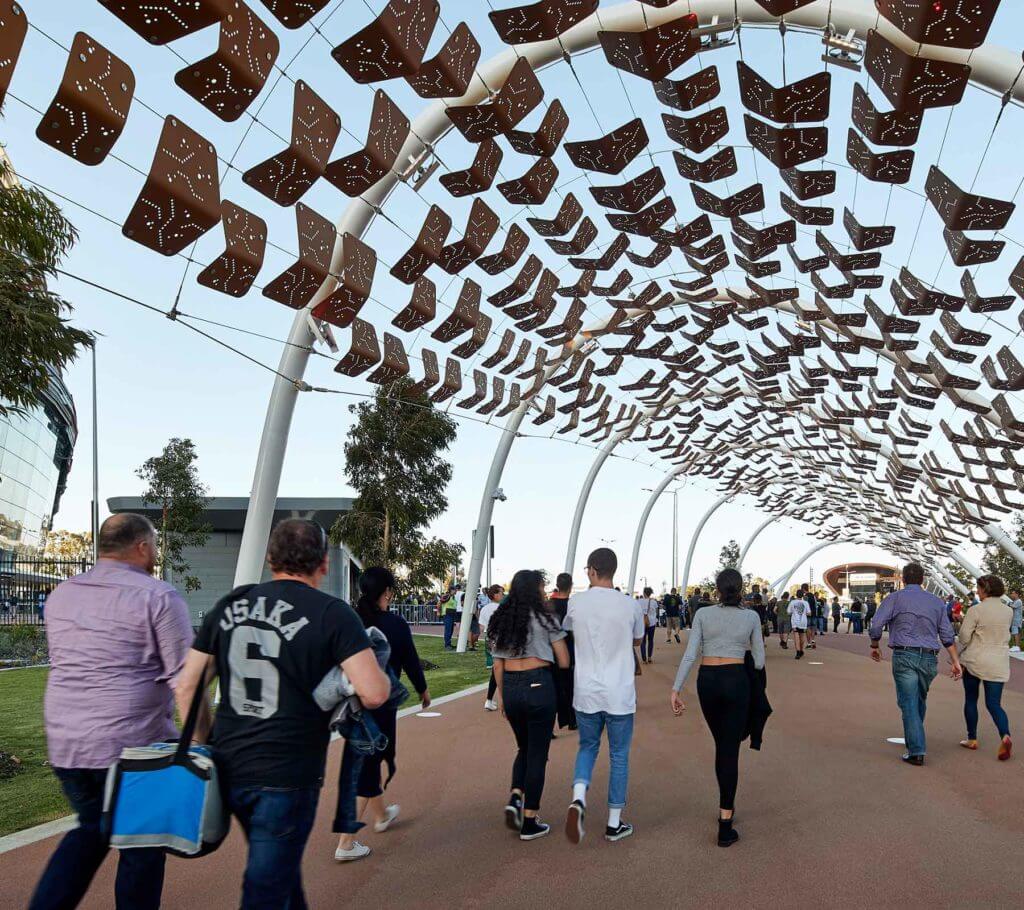 Surrounding the main venue is Stadium Park which features three recreational precincts of aesthetic and cultural significances. It is an ambitious move by the government to leverage Western Australia’s culture, history and Aboriginal heritage and hence, local tourism and entertainment scene. The initial success was quite considerable as Perth Stadium has won multiple awards (e.g. 5 accolades at the 2018 WA Architecture Awards, the Project of the Year in London’s The Stadium Business Awards…) and welcomed 122,395 regional, interstate and international visitors after just a year in operation1.

As Perth Stadium was planned out to be a spearheaded, city-defining architectural symbol in the long run, Hassell and their partners confidently chose anodised aluminium, including AAF Evershield® high grade finishes, for the stadium’s signature facades and exterior design.

Resulting from controlling treatment to explicit conditions, AAF Evershield® high grade anodising finishes achieve exceptional durability and hardness that exceed both the AAMA 611 and AS1231 standards. Our leading 30-year performance warranty is another reassurance that Perth Stadium will continue to be the icon of the west coast for decades to come.

The Community Arbour – a tribute to the Aboriginal heritage

One of the most eye-catching precincts is the Community Arbour – a 400-meter-long pedestrian walkway made of 43 individual arches and 3,500 folded aluminium panels. Besides functioning as a pedestrian flow control during crowded game days, the Community Arbour also represents “The Dreaming” stories of the Whadjuk and Noongar tribes, and offers exciting fans broad vistas of the stadium, the Swan River as well as the CBD skyline. In order to meet with colouring and durability requirements, anodising had been chosen over powder coating. However, anodising 3,500 folded panels, each with distinct Aboriginal inspired artworks, was a real challenge. Our teams at AAF Dandenong plant monitored the whole anodising process using the specified Aluminium Facade Management (afm) to ensure the AAF Evershield® Maroochy Sand finish was consistently applied for all surfaces. The anodised panels were then shipped from Victoria to Western Australia for on-site installation without the risk of damage.

After application, it is evident that AAF Evershield® Maroochy Sand finishes compliment the stadium’s LED light system, which happens to be one of the world’s biggest sports lighting systems. The anodised finish’s matt lustre and bronze shade range reflect the State’s unique geology of striated rock formations. When combined with 15,000 LED lights at night, the whole stadium’s anodised facades and precincts turn into a breathtaking light show unparalleled elsewhere.

Sorry, the comment form is closed at this time.

The long overdue solution for combustible cladding in the ACT

A Gem In Waterline Place, Williamstown